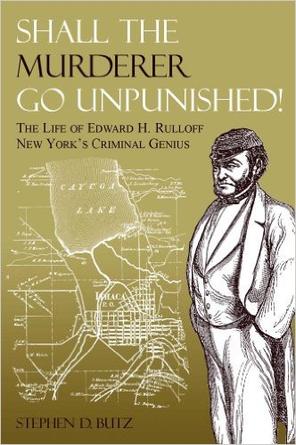 Shall the Murderer Go Unpunished! follows the timeline of Rulloff's extraordinary life. He first gained prominence in Ithaca, New York during the 1840's as a brilliant young physician and school teacher, who also had an interest in the formation of human language. This promising future however, came to an abrupt end in 1845 when he was accused of the disappearance and murder of his young wife and infant daughter. This began a series of incidents that led to one of the most exciting criminal investigations and legal battles of nineteenth century America. The events that occurred after the disappearance of his wife and daughter involved a spectacular cross-state man-hunt, a jail break, mob violence, and brilliant legal wrangling by none other than Rulloff himself. Incredibly, all during this tumultuous time, he managed to continue his work on formulating a theory on the formation of the human language, and nearly established himself as a respected scholar.

Shall the Murderer Go Unpunished!

The life of Edward H. Rulloff

a Biography by Stephen Butz

The title "Criminal Genuis" just scratches the surface of the brilliant yet twisted character that was Edward Rulloff. Mr. Butz brings us a biography that reads like a mystery or action/adventure novel. There are times you want to cheer Rulloff for his brilliance and tenacity, but in the end the reprehensible acts for which he was convicted, and for which he was accused, make you feel otherwise.

Rulloff's charisma leaps off the page, as he coerces henchmen to do his bidding, and convinces accusers of his innocence. The author compares Rulloff to Sir Arthur Conan Doyle's character, Professor Moriarty, which might raise a few eyebrows, but the similarities are striking.

I recommend this book highly; as a biography, slice of history, an examination of the history of Linguistics, criminal study or just a quick and exciting read. It is quick because it is a book I find hard to put down. The author has taken me to 19th Century New York, and despite all the horrific deeds, it is a place to which I like to return.

I couldn't put this one down! Just an amazing story that Stephen Butz has brought to life! If you liked the Alienist you'll love this!