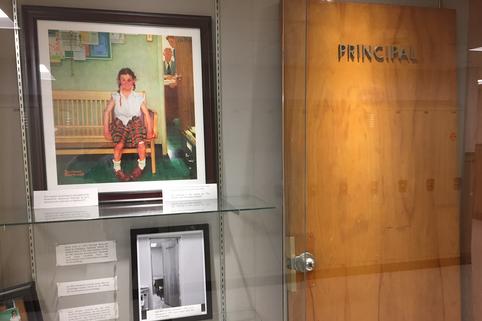 The famous American illustrator and celebrated artist Norman Rockwell lived in Arlington, Vermont from 1942 until 1954.  It was during this time that Rockwell painted some of his most famous works including the covers of the Saturday Evening Post.  Often times Rockwell would use local residents as models for his paintings, but it was the setting of one of his most iconic works of art, and not the model, that would forever link Cambridge Central School to Norman Rockwell.  Because his home and studio was located only 11 miles from Cambridge, Rockwell was very familiar with the area, which had constructed a new school in 1950. Rockwell decided to use the school’s main office as a setting for one of his most famous paintings, “The Young Lady with a Shiner” also known as “The Girl with the Black Eye”.

It had long been local lore within the halls of Cambridge Central School that the famous office door was the subject of Rockwell’s painting, but it was back in 2015, with the passing of the school’s latest building project, that Cambridge teacher Steve Butz started his quest to save the famous door, and make it part of a new school exhibit.  The office door has hung in the same location for over 60 years, and had been used by the principals of Cambridge for just as long.  But all that was about to come to an end, with the reconstruction of the main offices. Butz realized the significance of preserving the door, and wanted to take it a step further and try to put together an exhibit about its unique history.  With help from the Norman Rockwell Museum in Stockbridge, Massachusetts, Butz obtained rare study photographs taken by Norman Rockwell himself, which show the processes that he went through to make his famous painting.

Butz’s historical detective work revealed that Rockwell came to Cambridge school back in 1953, to study the office. He also used Ernest Bodenstad, CCS’s superintendent and principal along with his secretary, Leah Knapp Dusha as models.  What surprised Butz most about what his investigation, was that the door was removed from CCS and brought to Rockwell’s studio for a short time.  The door was delivered to and from the school by Arlington, resident, Walter Corey.

The resulting painting shows a happy schoolgirl sporting a black eye, waiting outside the principal’s office, where her teacher and principal decide her fate.  Mary Whalen Leonard was the main model for the paining, who posed in Rockwell’s studio when she was about 11 years old. "It took three or four sessions to get the reference photographs for The Young Lady with the Shiner just right.” Model Mary Whalen recalled. "The black eye was the hardest thing in that picture, it had to be just perfect." The solution for Rockwell was to copy a genuine black eye, but he was unable to find one locally. The local paper ran a story about his search, and when the national wire picked it up he soon had more offers than he could handle.  Whalen was also the model for many other Rockwell paintings.

The result of Butz’s work was the creation of a new exhibit in a showcase located in the hall near the new high school library.  The display not only shows the iconic door, but also tells the history of how Rockwell created his famous painting.  The image would eventually end up on the cover of the Saturday Evening Post’s, May 23, 1953 edition. The original oil painting is now part of the Wadsworth Atheneum Museum of Art's American Art collection in Hartford CT.. 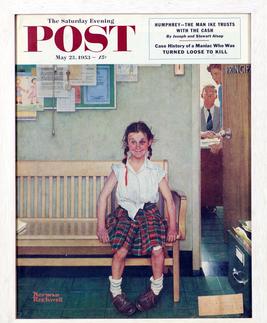