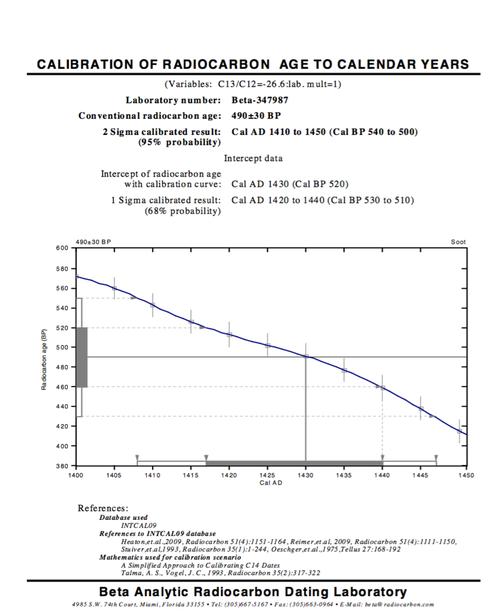 The “Indian Ovens” is a local geologic and cultural phenomenon located in the Taconic Mountains near Jackson, NY.   The ovens were rumored to be the remains of ancient cooking vessels used by Native Americans prior to colonization.  Teaching about local geology and the Taconic Mountains is part of my curriculum in Earth Science at Cambridge High School, and inevitably the subject comes up about how the ovens formed, and more importantly, were they actually used as ovens by paleo-indians?  The story has long fascinated me, so I decided to undertake a formal investigation with my students and try to solve the mystery.  The region where the Indian Ovens are located was formed during two orogenies.  An orogeny is a process which forms mountain ranges as a result of the convergence of two or more tectonic plates.  This process crushes together the Earth’s crust, forcing it to bend and thrust upwards to create mountain ranges.  My students study this important geologic process as part of their coursework in plate tectonic theory, which describes how the Earth’s crust is divided up into large sections, called tectonic plates.  These plates then interact with one another to form many geologic features including mountain ranges, deep ocean trenches, deformed rocks, earthquakes, and volcanoes.

The first tectonic collision that helped to form the Taconic mountains in Jackson occurred approximately 489-442 million years ago during the Ordovician Period.  At that time the rocks that now make up the hills and valleys along the NY/VT border in Southern Washington County, were part of a range of mountains that rivaled that of the modern day Himalayas.  These mountains are known as the Taconic Mountains.  Later during the Devonian Period 418-362 million years ago, another collision called the Acadian Orogeny, also helped to form the rocks that make up this area.  The rocks around the Indian Ovens site are primarily Taconic Phyllite.  Phyllite is a type of metamorphic rock that forms when the intense pressure of an orogeny transforms shale into a dense, often distorted rock with a blue/gray/green color, composed mostly of silicate, mica, and chlorite minerals.  Phyllite is a close cousin to slate, which is also found in the Taconic Mountains.  The rocks around the ovens site are unique in that they exhibit intense folding as a result of the mountain building process.  The aptly named hiking trail near the site is called the Folded Rock Trail, which locally is also known as the Peaked Rock Trail.  The "Indian Ovens" exist as a series of 6 holes which lay exposed along a cliff face composed of phyllite (Figure 1 below). Three of the holes are about 30 cm across (12 inches) and exhibit evidence of burning, as the roofs of the hole are stained black from carbon soot.  One of the upper holes is connected to a lower hole by an inside chamber, making the upper hole act almost like a natural chimney.  There is also evidence of exposure to heat within the ovens as evidenced by the heat cracks and discoloration of the phyllite near the top of each hole.  Upon rubbing a finger on the carbon staining within the ovens, no trace of carbon comes off, suggesting that the fire staining was not recent.

After investigating the geology of the area, and spending time hiking around the region and identifying its geologic makeup, it is clear that the ovens formed naturally as a result of spherical deposits of quartz weathering out of the phyllite rock face.  The rocks of Taconic Mountains are laced with deposits of quartz, which formed when hydrothermal fluids precipitated out silicates in the form of quartz, which is often seen as white veins and nodules within the phyllite.  In rare occasions, the quartz intrusions in the area can also appear crystal clear, as is the case with the “Gold Mine” located near Colfax Mountain in jackson.  Located there are pure quartz crystals that look almost like diamonds.  Upon investigating the outcrops of rock around the Peaked Rock area, I found many examples of other spherical quartz deposits in the phyllite (see Figures 2 and 3 below), proving that this process is what most likely formed the holes that make up Indian Oven formation.

Although the geologic origin of the ovens is apparent, the question remains, were the holes used as ovens or as some type of ceremonial fireplace by Native Americans?  The evidence shows that fires were definitely burned in them, but were they from Native Americans hundreds or even thousands of years ago, or was it from the Boy Scouts?  In order to answer this question, I contacted the and landowner, Mrs. Grace Campbell of Jackson, NY, who graciously granted me permission to access the site, and take samples of the rocks within the ovens for testing.  The site sits atop of a ridge with an elevation of about 1,500 feet.  It is a deciduous forest predominated by Rock Oak (Quercus prinus) also known as Chestnut oak, a hardy tree species that lives in high elevations within the Taconic Range near Jackson.  It was hard for me to imagine that this location, up along the side of a small cliff, would be a place where Native Americans used ovens. The only thing I could conceive as plausible would be the fact that the Rock Oak would be an important source of acorns, which was certainly a food source for local tribes who resided within the Battenkill Valley since at least 5,000 years before present.  Evidence of this was found near the site of the Cambridge Central School District Office.  Arrowheads there have been dated as being from 2,500 BC, which makes them about 5,000 years old.  These arrowheads are on display at the CCS District Office.  So it is known that Native Americans have lived in the area for a long time, but was this a good location to process loaves of acorn bread?  Or, could this be a ceremonial site where fires were burned?  Radiocarbon dating might hold the clue to answering this question.  After gaining permission to access the site from the landowners, I hiked in to it with Ken Facin, a fellow educator and trained geologist, to help me carefully retrieve rock samples from inside the ovens.  Ken and I chose two spots from the roof of two of the ovens, which contained clear carbon staining from the fires.  One of the sample was extracted from the “chimney” within the ovens.  We carefully chiseled out two large pieces of phyllite that had good carbon staining that could be tested, making sure to not damage the aesthetics of the formation in the process.

After our expedition, I returned to my classroom and contacted Dr. Kurt Jordan, an anthropologist from Cornell University, and inquired how I might be able to radiocarbon date the soot staining on the rocks taken from the ceiling of the Indian Ovens.  He suggested that I contact BETA Analytic Inc. a lab in Florida that specializes in radiocarbon dating.  Radiocarbon dating is a very reliable scientific technique that uses the radioactive breakdown of the different isotopes of carbon, like Carbon 14.  Carbon 14 is an element that is prevalent in all living things, and can be a useful tool for dating objects that contain carbon.  After contacting the lab, they suggested that I try to test the sample to see if the soot staining was formed recently by performing a simple pre-test.  Up to this point in the investigation, I had been informing students in both my Earth Science and Environmental Science classes about the Mahican "Indian Oven" Project.  They too were intrigued, and now after learning about the pre-lab test, it was time to get them involved in the project.  In each of my classes, I divided my students into groups, and gave each one a small sample of the Indian Oven rocks that were stained with soot.  The lab suggested that we soak the samples in a weak solution of hydrochloric acid.  We used a 25% HCL solution, which would remove any recent carbon stains.  The experiment would reveal that if carbon soot was a recent, it would be washed off from the acid bath.  My students soaked their samples in the acid solution for 24 hours, and then checked them to see if the staining came off.  After the first 24 hours of soaking, students carefully removed their samples and washed them off.  The result of the experiment revealed that stains remained.  This indicated that the carbon soot was indeed old enough to test.  Just to be sure, students soaked the samples for another 24 hours.  The next day, they removed and washed them again, and the staining was still there.  This lead us to move into the next phase of the project, which involved sending off samples to the lab for radiocarbon dating.

The radiocarbon test revealed that the fires which caused the carbon staining occurred between 1410 and 1450 AD (see radiocarbon report below).  This means that someone had fires burning in the ovens around 600 years ago.  Because it is highly unlikely that Europeans were in the area during the 1400’s, then the radiocarbon date suggests that the fires must have been made by Native Americans.  The question remains though, what were the fires actually used for?  Cooking?  Baking?  Or could they have be ceremonial fires?  Clues to their use may be found by the name of the wide flood plain of the Battenkill River located down below the oven site. This area is known as Anaquassacook, which may be a derivation of the Algonquin word "Anaqushauog" which means "place of trade". This area was once the location where indigenous people from the Mahican, Iroquois and possibly other tribes would come to peacefully trade. Could the "ovens" have actually been the place where a smokey fire was lit to signal the time for this annual trade event? Further investigation of the site needs to be done to see if there may be any relics left there from the inhabitants that used those fires so long ago.

The 43 science students who took part in the project at CCS were as surprised as I was at the results.  Not only did they get the opportunity to participate in a real scientific investigation of a local geologic and cultural resource, but also helped to reveal the history of the Indian Ovens.