The Vassar Mastodon was created in 1902 by Professor William Buck Dwight, head of the Vassar College Geology Dept. and curator of the Vassar College Natural History Museum.  The Vassar Mastodon was once a complete skeleton made from the remains of a Mastodon unearthed in Circleville, Ohio in 1895, and also contained the bones of 8 other mastodons.  Mastodons are believed to have become extinct around 10,000 years ago as a result of changing climate and hunting by Paleo-Indians known as the Clovis People.

The Vassar Mastodon was put on display at Vassar College from 1902 until 1986, when it was disassembled and put into storage when a new science building was being built.  The skeleton then lay forgotten in a storeroom for over 20 years and eventually showed up at the NY State Museum.  In the fall of 2013, the museum was in the process of separating real bone from the plaster of the Mastodon when Steve Butz, a Cambridge High School science teacher, noticed it and inquired about its history.  Upon learning the story behind the beast, and seeing that the skull was partially damaged and in disrepair, Mr. Butz asked if the remaining pieces could be donated to Cambridge Central School, where it could be restored and used a teaching tool.  Dr. Robert Feranec, Curator of Paleontology at the museum agreed, and gave the skull, 2 tusks, tail, and the lower left rear leg and foot of the Vassar Mastodon to be on permanent loan at CCS.

Once the Mastodon arrived at CCS, Mr. Butz oversaw the restoration by enlisting science and art students to participate in the project, which included repairing its broken tusk hole, a broken leg, and repainting all of the pieces.  Also, Bill Casey and Dan McDermott who work in the school’s Transportation Department, constructed a custom cart to hold the beast, which will allow it to be wheeled throughout the school and used by students K-12.  The cart is a mobile display of the Vassar Mastodon and also includes other instructional tools for students to learn about these extinct creatures that once roamed New York.

​The project was highlighted in the National news: 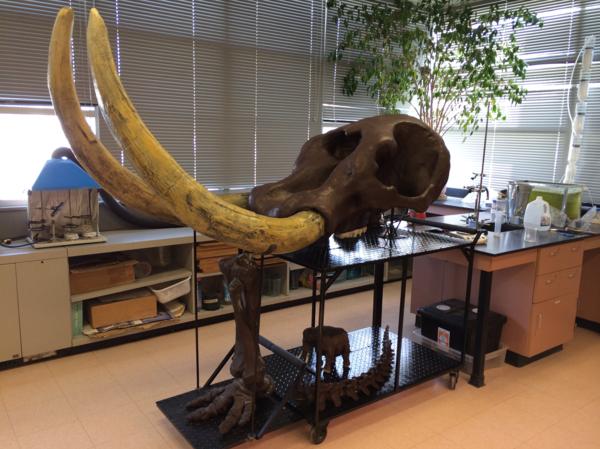 The Restoration of the Vassar Mastodon